Alexander Gray Associates presented recent and historical paintings by Harmony Hammond (b.1944), highlighting the artist’s long-standing commitment to process-based abstraction. On view were examples of her 1970s “Weave Paintings” series and recent work that together represented what the artist calls “near monochrome” paintings. This body of work purposely invites content by positioning the painting as a site of negotiation between what exists inside and outside the picture plane. For Hammond, abstraction does not preclude social engagement, as she states, “I make large thickly painted near-monochrome paintings. While these paintings engage with (and I like to think, interrupt and resist), the history of modernist painting—and more specifically, narratives of abstraction and monochrome—they come out of post-minimal and feminist concerns with materials and process rather than modernist reduction.”

Hammond’s “Weave Paintings,” created between 1975 and 1977 while living in New York, occupy a space where painting and sculpture merge, cementing the artist’s continuous exploration of formal concerns while insisting on the political nature of abstraction to investigate what art historian Julia Bryan-Wilson calls “the space of the between.” In Kypros Born (1975), Hammond applied successive layers of oil paint mixed with Dorland’s wax, incising the still wet surface with weave patterns. This process of layering and marking the painted surface results in objects that reference and subvert textile traditions in craft and Modernism—from Anni Albers’ Bauhaus experiments to native North American basket-weaving.

Since 1984, Hammond has lived and worked in New Mexico. In her most recent body of work she continues to expand the materiality of the painted surface, emphasizing painting’s relationship to the body and the viewer. Making their New York debut, the canvases of Fraggle (2014) and Spillway (2014) are wrapped with pierced and grommeted straps, then painted in layers of oil and wax until it is difficult to discern sequence, materiality, or gesture, evoking a body simultaneously restrained and emancipated. As curator Tirza True Latimer states, their “imposing scale and muscularity contribute to this sense of physical negotiation.” Rather than existing in their own self-referential sphere as espoused by the modernist ideal, these paintings extend beyond the flatness of the canvas and directly confront the viewer. 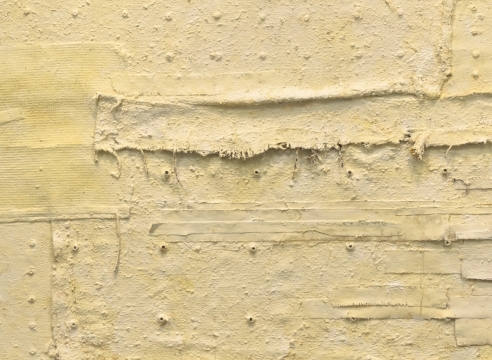