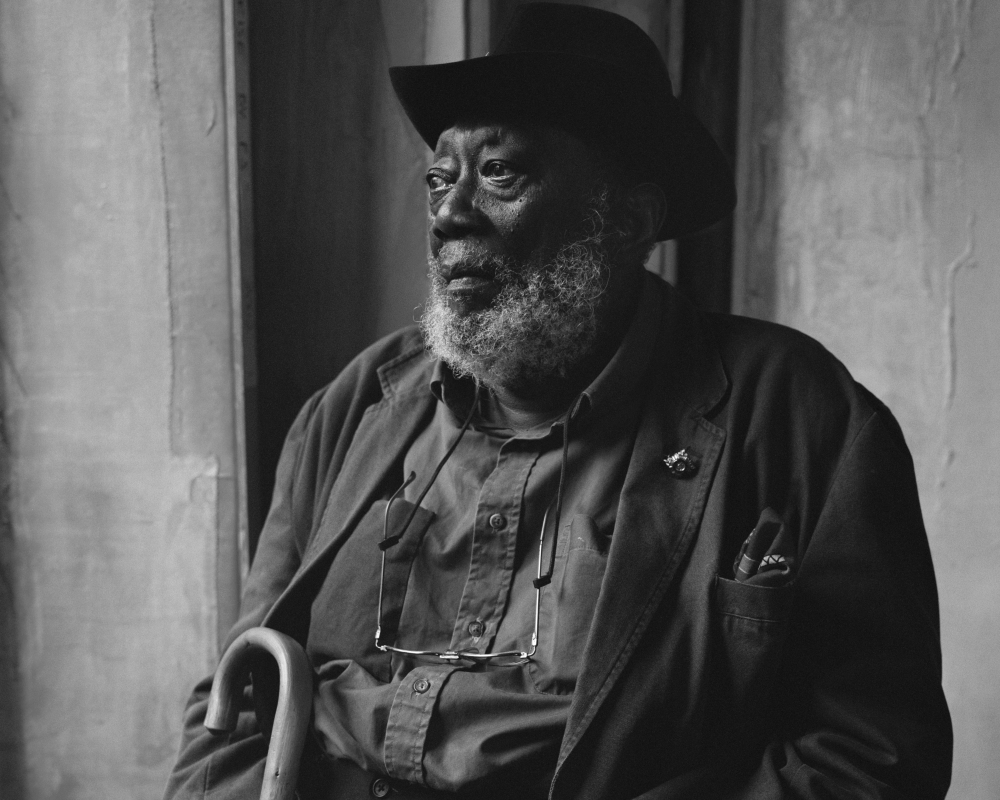 Alexander Gray Associates is pleased to announce representation of Frank Bowling OBE, RA (b. 1934). Bowling was born in Guyana and maintains studios in London and New York. For over five decades, Bowling’s distinct painting practice has been defined by an integration of autobiography and postcolonial geopolitics into abstract compositions. The Gallery’s first exhibition of his work is planned for September 2018.

Born in British Guyana, Bowling moved to London in 1953, where he studied both painting and poetry at Royal College of Art from 1959–62. Emerging at the height of the British Pop movement, his early practice emphasized the figure, while experimenting with expressive gestural applications of oil paint. Prompted by his first Guggenheim Fellowship, in 1966 he moved to New York to immerse himself in Post-War American Art, and his practice shifted towards abstraction. As art historian Mel Gooding remarked “for Bowling, the complexities and complications of New York art were compounded by the problematic issues of personal expression and public representation that much occupied the thoughts and discussions of his Black friends and associates in a largely segregated art world.” It was in this environment that he became a unifying force for his peers— he curated the seminal 1969 exhibition 5+1, featuring work by Melvin Edwards, Al Loving, Jack Whitten, William T. Williams, Daniel LaRue Johnson, and himself. He was also a frequent contributor to publications including Arts Magazine where he wrote incisive texts on race and artistic production. His long  friendship and intellectual sparring sessions with the renowned art historian and critic Clement Greenberg opened up further conversations about painting and politics.

Concurrent with his move towards abstraction, Bowling sought inventive ways in which to continue incorporating pictorial imagery into his work. In 1964 the artist began screen-printing onto canvases personal imagery, notably a 1953 photograph of his mother’s store in Guyana, Bowling’s Variety Store. He would go on to create a number of works on these canvases in the following years, embedding personal narrative beneath the surface of his paintings. Subsequently, Bowling began his groundbreaking series, Map Paintings (1967–71); In these expansive, chromatic canvasses, thin soaks of acrylic would provide ground for images of re-oriented continental landmasses spray-painted with stencils. As curator Okwui Enwezor explains, “by staking a ground around the idea that abstraction need not be disunited from content, especially as it intersects cultural experience and historical subject matter, Bowling boldly experimented with diverse modes of building a painted surface.”

Since 1971, Bowling has abandoned his use of descriptive imagery, and focused primarily on material and process. In place of the earlier map formations, geometry provides the foundation to structure his compositions; he begins with swathes of color and applies gestural drip overtop, harnessing multiple techniques to incorporate a range of paint viscosities, resulting in dynamic, yet unified surfaces. In this way, he inherits and interprets the multifaceted legacy of American abstraction— both gesture and field. His palette is vibrant and diverse, fluctuating between warm saturated tones and soft pastel hues, muddied textures and sometimes shimmering surfaces. He introduced a body of Poured Paintings (1973–78), which he created by tilting the canvas and inviting the effects of gravity into his process, making clear his interest in experimentation and chance as necessary to innovation, and opening up metaphor for shifting geographical orientation and movement across bodies of water. His approaches often include building up paint to emphasize sculptural dimensionality; since 1981 he has embraced pictorial depth further, using Styrofoam that transforms his canvasses into reliefs, with surfaces and colors that imply geologic strata. In more recent years, collaged elements have introduced “seam” imagery in homage to his mother, who was both a seamstress and a business owner, through the application of unexpected materials: glitter, plastic toys, and acrylic gels and foams. Bowling has described his embrace of pure abstraction as a process of “unlearning” his early techniques; At the same time, his evocative, personal titles reaffirm the connections of past and present.