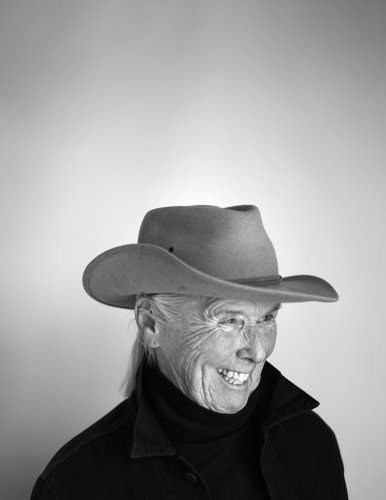 The book release for Harmony Hammond: Material Witness, Five Decades of Art will feature a series of short talks on Hammond’s exhibition inside the galleries.

We are celebrating the culmination of Harmony Hammond’s first museum survey, Material Witness, Five Decades of Art, with a launch of the artist’s first hardcover catalogue co-published with Gregory R. Miller & Co. and distributed by D.A.P. This event will feature a series of short talks on Hammond’s exhibition inside the galleries by an intergenerational group of artists whose own practices have intersected or been influenced by Hammond’s. Celebrate this trailblazing artist and her first major museum publication with food, drink, and an opportunity to purchase the book at a special price! A roundtrip shuttle from Manhattan to the Museum is available. For more information and to purchase tickets visit shop.aldrichart.org.

LJ Roberts is an artist working in installation, textiles, collage, and text. Their work addresses queer and trans politics, material deviance, alternative kinship structures, archives, and narrative. LJ’s first major museum commission is currently on view in the critically acclaimed exhibition Nobody Promised You Tomorrow: Art 50 Years After Stonewall at the Brooklyn Museum. In 2015, LJ was one of nine recipients of The White House Champions of Change Award for LGBTQI artists. They also received the 2019 President’s Award for Art and Activism from the Women’s Caucus for Art. LJ lives and works in Brooklyn, NY and teaches at Parsons School of Design. They are a 2019-2020 Artist-in-Residence at Pioneer Works in Brooklyn, NY.

Elaine Reichek has been using thread as a core element in her work since the early 1970s, and was an early pioneer among conceptual artists in rethinking the role of craft in the fine arts and investigating alternative narratives and histories. Her most recent solo exhibitions include Sight Unseenat Marinaro, New York (2019); Now If I Had Been Writing This Story at Vienna Secession (2018); Invisible Citingsat the Addison Gallery of American Art, Phillips Academy, in collaboration with sculptor Jeanne Silverthorne (2017); and Minoan Girlsat Shoshana Wayne Gallery, Santa Monica, CA (2016). Reichek lives and works in New York.

Jenny Snider earned her MFA in 1966 at the Yale School of Art and Architecture, where she studied painting with Al Held and Jack Tworkov. In the 1980’s and 1990’s, she received two Fellowships each from the National Endowment for the Arts and the New York Foundation for the Arts. Snider spent a year as a Fellow in Visual Art in 2011-2012, at the American Academy in Rome. In 2014, she was the recipient of a Hassam, Speicher, Betts, and Symons Purchase Prize, and the Arts and Letters Award in Art from the American Academy of Arts and Letters. Other major awards include the 2006 President’s Award for Excellence in Teaching, Queens College CUNY, and three residencies at Yaddo, Saratoga Springs, NY. Her work is included in the collections of the Guggenheim Museum of Art, the Whitney Museum of American Art, the Jewish Museum, the Davis Museum at Wellesley College, and in numerous private collections.