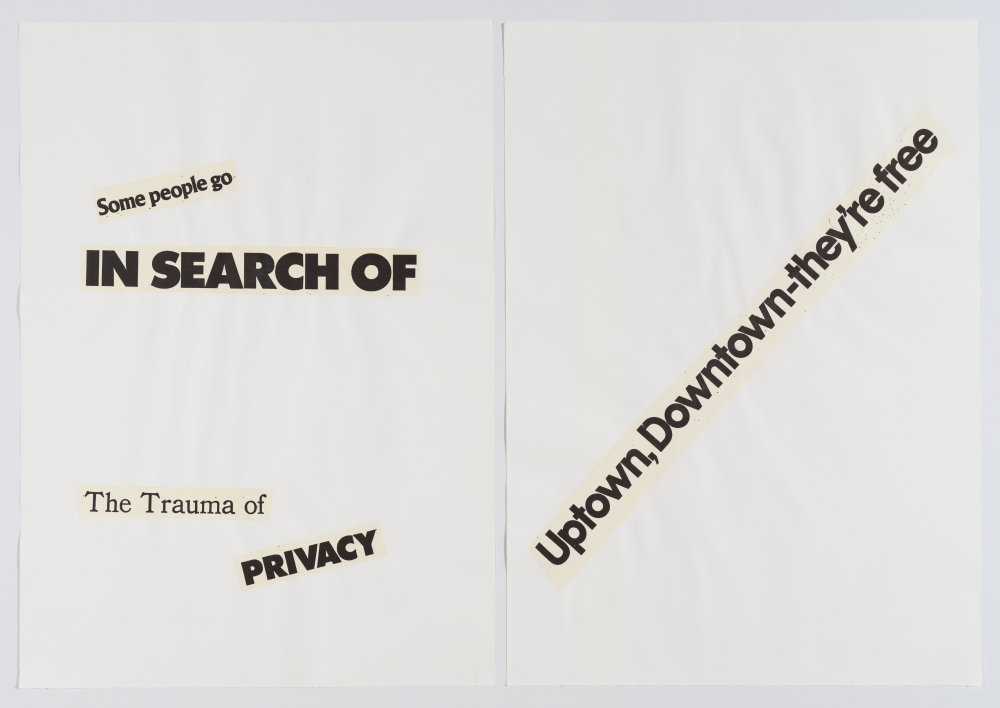 Lorraine O’Grady (b.1934 USA) combines strategies related to humanist studies on gender, the politics of diaspora and identity, and reflections on aesthetics by using a variety of mediums that include performance, photo installation, moving media, and photomontage.

A native of Boston, MA, her work involves her heritage as a New Englander, and daughter of Caribbean immigrant parents. After she graduated from Wellesley College in 1956 studying economics and Spanish literature, she served as an intelligence analyst for the United States government, a literary and commercial translator, and rock music critic. Turning to visual arts in the late 1970s, OʼGrady became an active voice within the alternative New York art world of the time. In addition to addressing feminist concerns, her work tackled cultural perspectives that had been underrepresented during the feminist movements of the early 1970s.

"Cutting Out CONYT" returns to O’Grady’s 1977 work "Cutting Out The New York Times (CONYT)" which consists of 26 found newspaper poems made between June 5 and November 20, 1977 from successive editions of the Sunday Times. Building on the 1977 series’ successful transformation of public language into private, in "Cutting Out CONYT" O’Grady repurposes the collages to achieve a failed goal of the original work: the creation of what she terms “counter-confessional” poetry.

"Cutting Out CONYT" culls the poems and reshapes the remains into 26 new works that adopt a form the artist refers to as “haiku diptychs.” Each of the haiku takes as its source a single 1977 poem. By concentrating and refining the original series’ voice, "Cutting Out CONYT" serves as a bridge between O’Grady’s early and later works. As she explains, “Making it has allowed me to maintain the tensions between my more explicit voice and my less explicit voice in a way that feels fruitful to me."

These two voices, which O’Grady has alternately identified as “narrative/political,” “expressive/argumentative,” “inner-directed/outer-directed,” and “post-black/black,” inform all of her work. With the quip, “I was ‘post-black’ before I was ‘black,’” she characterizes her artistic trajectory from the 1970s into the 1980s as an evolution from producing deeply personal works imbued with her identity to more overtly politically motivated ones. As a result, like its CONYT source material, "Cutting Out CONYT" references what O’Grady describes as “a diaspora mind, a diaspora experience.” Like other diasporic “new world” artworks, including Rivers, First Draft (1982) and Landscape (Western Hemisphere) (2010/2011), this series is implicitly political. O’Grady expands, “Produced with 40 more years of life and aesthetic experience, I feel that it [Cutting Out CONYT] embraces the mysterious intertwinings of narrative and politics, post-blackness and blackness in a way that Cutting Out The New York Times could not accomplish or even imagine.”

At the same time "Cutting Out CONYT" engages with the counter-confessionalism of O’Grady's 1977 poems and transforms it via its diptych format into something distinctly other. Refuting hierarchical binaries through its two-panel presentation—a recurring device in the artist’s work—the series insists on “both/and” rather than “either/or.” Its structure allows O’Grady to question apparent oppositions between her voices while maintaining their productive tensions, siting her work in the interstitial space between personal and political, inner and outer, post-black and black. Ultimately, O’Grady summarizes, “There was no extrication of the personal from the political, because these qualities were not opposites but obverse and reverse of the same coin.”