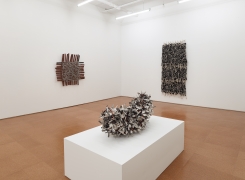 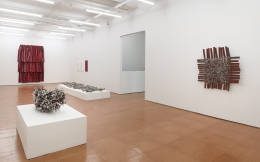 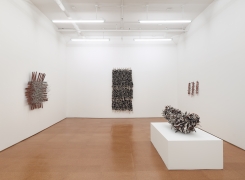 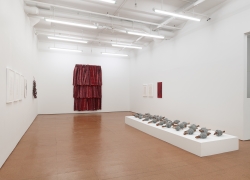 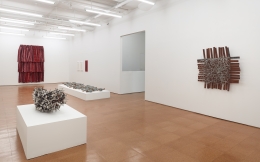 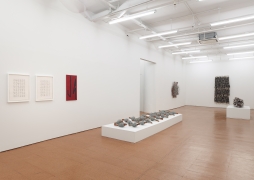 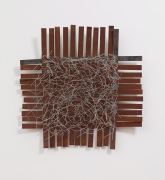 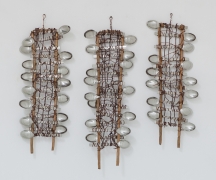 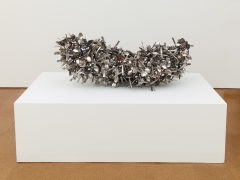 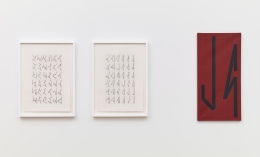 Alexander Gray Associates presented an exhibition featuring recent works by Hassan Sharif, accompanied by a fully-illustrated catalog and a conversation between the artist and independent curator Murtaza Vali. Sharif (b.1951, Dubai, United Arab Emirates) is recognized as a pioneer of conceptual art and experimental practice in the United Arab Emirates, and has highly influenced the region’s artistic landscape through his art and writings. Sharif’s second exhibition at the Gallery focuses on the his recent developments in two ongoing series, Semi-Systems (1983–2014) and Objects (1982–2014).

First conceptualized in the 1980s, Sharif’s Objects are anchored in the process of weaving, which he describes: “Weaving requires a very simple handicraft that is at once repetitive and non-repetitive.” Responding to the landscape of material culture in the U.A.E., which has undergone rapid social and economic changes since its independence in 1971, Sharif’s Objects are created from consumer products sourced from local markets and stores, including spoons, towels, floor mats, and electronic wiring. The selected works in the exhibition both transform and synthesize these materials, questioning authorship and labor, permanence and social stability. For Sharif, his Objects are closely connected to his own body and push notions of social exchange.

Sharif approaches his Semi-Systems with the same rigorous and repetitious method embodied by his Objects. Departing from his Objects, however, the Semi-Systems are connected to the cerebral. In February 2013 (2013), the artist uses self-invented calculations and permutations to determine a variety of possibilities for the shape of an angular line. Seemingly at random, he then selects some of the possibilities to depict on a large scale. At any point, the system is on the verge of unraveling, referencing the systematic but frenetic development of Modern Dubai. Both Sharif’s Objects and Semi-Systems embody the tension between order and chance, repetition and randomness, detachment and involvement, which are fundamental aspects in his practice.

Murtaza Vali is a critic, curator, editor, and Visiting Instructor at Pratt Institute, Brooklyn, USA. He received an MA in Art History and Archaeology from New York University’s Institute of Fine Arts (2004). A recipient of a 2011 Creative Capital | Warhol Foundation Arts Writers Grant for Short-Form Writing, he is a Contributing Editor at ArtAsiaPacific and an Editorial Correspondent for Ibraaz.org, and his writing has appeared in numerous international publications and in catalogues for galleries and nonprofit institutions. He was most recently Guest Curator for the Abraaj Group Art Prize 2013, and his previous curatorial projects include Accented (2010) at BRIC Rotunda Gallery, Brooklyn, USA, and Brute Ornament (2012) at Green Art Gallery, Dubai, UAE. He also edited Manual for Treason, a multilingual publication commissioned by the Sharjah Art Foundation for Sharjah Biennial 10 (2011). He lives and works between Sharjah, UAE and Brooklyn, USA. 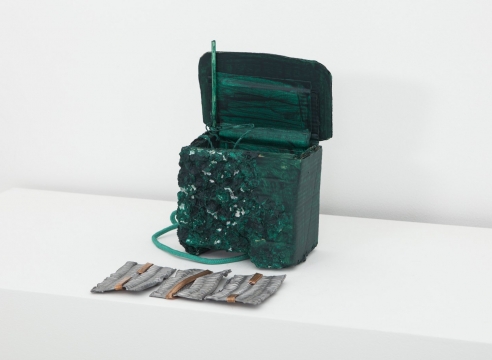 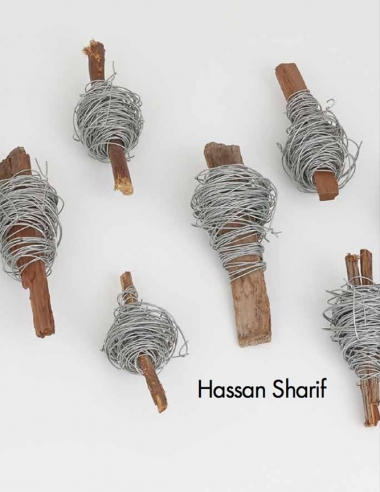