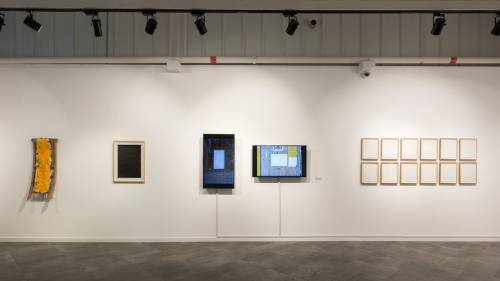 Hassan Sharif included in the exhibition The Monochrome Revisited at the Jean-Paul Najar Foundation, Dubai, UAE.

The Jean-Paul Najar Foundation (JPNF) presents The Monochrome Revisited, an exhibition that explores the history and evolution of the monochrome. The exhibition is divided into three parts: the first section focuses on the ‘first monochromes’ found in printed matter from the seventeenth to the nineteenth centuries, putting into question its genesis; the second section takes its inspiration from Marcia Hafif’s seminal text Beginning Again, illustrating her purpose with selected works; and the final part of the exhibition looks at how artists today continue to be preoccupied with the monochrome, engaging with it in their practice to explore contemporary issues.

In late 2015, an announcement was made at the State Tretyakov Gallery in Moscow that incited controversy. Art historians at the national museum had discovered, under Kazimir Malevich’s iconic composition Black Square (1915) a scrawled reference to a provocative work sardonically titled Negroes Fight in a Tunnel by poet Paul Bilhaud. First exhibited in 1882 at Les Arts Incohérents, Bilhaud’s politically incorrect work (today considered to be the first documented monochrome) intended to simultaneously ridicule modernism as it acknowledged its radicalness. Fifteen years later, in 1897 Alphonse Allais published Album primo-avrilesque, which featured a number of works including Paul Bilhaud appropriated black monochrome. This section of the exhibition looks at this publication as well as others including Robert Fludd’s (first published in 1617) masterwork Utriusque cosmi maioris scilicet et minoris metaphysica, physica atque technica historia (The Metaphysical, Physical and Technical History of the Two World, the Major as well as the Minor) and Laurence Sterne's The Life and Opinions of Tristram Shandy, Gentleman (1759-1767).

The second part of the exhibition takes as its core Marcia Hafif’s influential essay Beginning Again, published in Artforum in 1978. Throughout her fifty-year artistic career, Hafif, sought to push against any notion that “the enterprise of painting”1 had come to an end. She writes, “It was necessary to turn inward to the means of art, the materials and techniques with which art is made. Artists still interested in painting began an analysis – or destruction – of painting, turning to the basic question of what painting is.”2 We pay homage to Hafif and the important artists she references in her text exploring not only their use of material and technique but the contemplative attributes they bestow onto the monochrome. Artists include James Bishop, Dale Henry, Ralph Humphrey, Douglas Sanderson, Lucio Pozzi, and Susanna Tanger. The exhibition then looks at how these artists elaborated and expounded on the art form, giving a deeper understanding of monochrome painting.