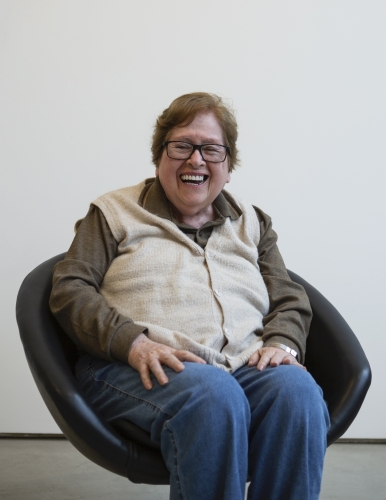 We remember Teresa Burga, a great artist who passed away with COVID-19 on 11 February 2021 in Lima.

Teresa Burga is an internationally acclaimed artist of feminist "conceptual art,” which she always negotiated as a concrete space of action in the context of Peru's colonial heritage and the political reality surrounding it, and whose structures of violence and power, conventions and ethnic attributions she deconstructed in her work. This also means that her work is not to be read in the context of the formal-aesthetic exercises of "Western" conceptual art, but rather as an analysis of the administrative, bureaucratic, political powers inherent in colonialism, which she radically brushes against the grain. Her work gains its topicality by anticipating contemporary discourses on the decolonization of art as well as art institutions, conveying them as historical and translating them into the present.

The multimedia oeuvre includes paintings, conceptually conceived, extensive drawing series, large-scale environments, technical media such as slide or video installations, and even cybernetic installations. The trans-disciplinary character underlying many of the work cycles is evident, among others, in the installation "Perfil de la mujer Peruana," 1981 (Profile of the Peruvian Woman), which she realized in close cooperation with the psychologist Marie-France Cathelat.

Coming from Pop Art, Burga was co-founder of the Arte Nuevo group in 1966, which used an ironic "pop minimalism" and realized public happenings. After a short period of study in Chicago (School of the Art Institute of Chicago) from 1969 to 1971, Burga returned to Peru, where she continued her conceptual work, despite all the adverse circumstances.

Teresa Burga's work was known only to a small public until the 2000s. Her rediscovery is based on the commitment of a then young generation of curators who set out in search of her recent history and at the same time wanted to situate it in an art scene that was becoming more global. Among them were Miguel Lopez, Emilio Tarazone and Dorota Biczel. Teresa Burga opened her archives to them, mediated the contexts, and worked intensively with the young curators to sift through and reconstruct their complex, partly interactive installations. It is thanks in particular to Teresa's open and cordial manner that the first comprehensive solo exhibition took place in 2010 at the Instituto Cultural Peruano Norteamericano (ICPNA) in Lima and in 2011 at the Württembergischer Kunstverein in Stuttgart. The latter was then also the occasion for the Barbara Thumm Gallery to take on the work and secure it in close association with the Museo de Arte de Lima (MALI). At the same time Teresa Burga was presented to an international audience for the first time at the Istanbul Biennial 2011. This was followed by presentations with several new and historical works at the 56th Venice Biennale by Okwui Enwezor, 2015 or in the traveling exhibition "Radical Women: Latin American Art, 1960-1985" 2017 - 2018 (Hammer Museum Los Angeles, Brooklyn Museum of Art, New York, Pinacoteca de São Paulo, São Paulo). In 2019, two extensive retrospectives featured her artworks at Migros Museum, Zurich and Kestner Gesellschaft, Hannover.

Burga was able to experience and enjoy the rapid rise of her international recognition in the last decade of her life. A late body of work emerged that includes sculptures, drawings and audio installations. Very personal works reflecting on the finitude of her own life were created alongside works that relate to Peru's current political and social situation.

Now Teresa Burga has passed away. Her spirit, which permeates the works, remains a perpetual mandate for dialogue with the time from which her art speaks to us, which always announces a future that Teresa transmitted to us poetically as well as critically, sensually as well as politically.

Many thanks to Hans Christ for his obituary in honor of Teresa Burga.

An obituary by the curator Miguel Lopez may be read here.