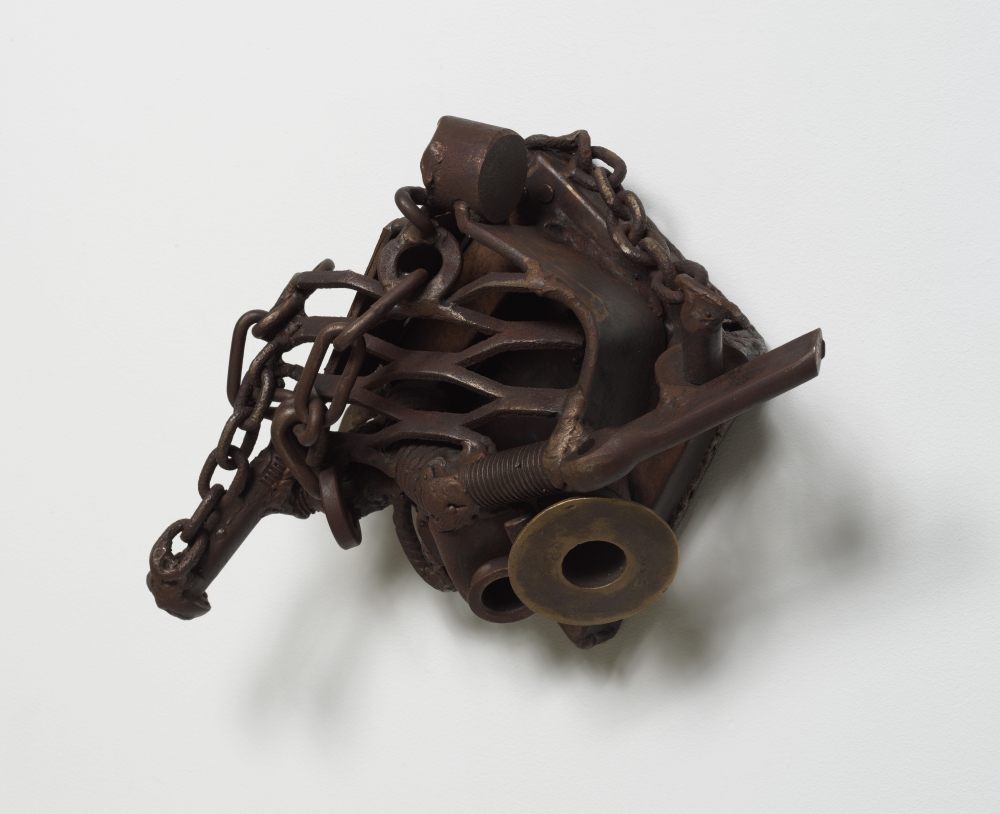 Melvin Edwards included in Where the Oceans Meet, curated by Hans Ulrich Obrist, Asad Raza, Gabriela Rangel, and Rina Carvajal, at the Museum of Art and Design at Miami Dade College, FL.

Museum of Art and Design (MOAD) at Miami Dade College (MDC) will present Where the Oceans Meet, an exhibition of modern and contemporary art that resonates with the pioneering thought of two Caribbean writers, Lydia Cabrera and Édouard Glissant. The international group of thirty-eight artists and collectives in the exhibition consider notions of shifting and porous borders—geographic, national, cultural, social, racial, ethnic, and linguistic—and how crossing borders has shaped our world. The exhibition is curated by Hans Ulrich Obrist, Asad Raza, Gabriela Rangel, and Rina Carvajal. Where the Oceans Meet will be on view from May 26 to Sept. 29.

We often imagine that globalization and technology bring us closer together and make us more connected, yet borders—both physical and ideological—increasingly divide us. Where the Oceans Meet engages two key figures who devoted their work to thinking through borders: the Cuban painter, scholar, and writer Cabrera (Havana, Cuba, 1899–1991, Miami, Florida) and the Martinican philosopher, poet, and literary critic Glissant (Sainte-Marie, Martinique, 1928–2011, Paris, France). Embodied by the works of art in the exhibition, the ideas of Cabrera and Glissant together explore the grounds from which art can consider and break through barriers of history, geography, and culture.

Where the Oceans Meet gathers these artists’ and writers’ visions for transforming the world when politics fail. For Glissant, such visions condense a poetics as “a new region of the world.” Moving between cultures, the artists in this exhibition handle multiple layers of time and space, making palpable the many opacities pertaining to migration, diasporic movements, language, race, gender, memory, history, religious rituals, violence, and hospitality.

In her transdisciplinary intellectual and creative work, Cabrera fluidly connected cultures, languages, and genres while disrupting racial barriers. Her research made possible a new awareness of culture conceived as a process of social relations. As a writer and ethnographer, she approached the languages, religions, myths, and cosmologies of Afro-Cubans without class prejudice or cultural hierarchies. Similarly, her disinterest in academic theorizing and her methods of constructing knowledge led her to imagine a rich space of contamination between fiction and reality, between her own literary work and the testimonies of her informants, which fed her numerous ethnographic studies. This exhibition puts Cabrera’s ideas into productive communication with those of Glissant, likewise committed to preserving and highlighting connections among cultures. For Glissant, the archipelago and the drift of the oceans constitute a pattern for a future region of the world, where oceans (and cultures) meet. His work transgresses the boundaries between theory and poetry to enhance understanding of language, identity, space, history, and knowledge. He examines the pain historically endured by Caribbean communities, and the sustainability and innovation that derives from survival under duress, to contemplate cultural transformations affecting peoples today on a global scale.

The title of the exhibition, Where the Oceans Meet, comes from a sentence that opens Glissant’s 2006 book Une nouvelle région du monde (A New Region of the World). The phrase suggests the geographical connection between Glissant and Cabrera; it also hints at a transnational and global conception of the world. Where the Oceans Meet implies a constantly shifting border where peoples, cultures, languages, memories, and identities encounter and affect each other, in favorable times as well as in times of disaster. This swarm of tides and streams also conjures an image of the mind, where individual and collective subconscious drives and memories meander. More than a metaphor, it names the location where the multiple layers and sedimentations of our global world encounter and dissolve geographic and political frontiers.

We may also understand Where the Oceans Meet as referring to an aesthetics generated within and from meetings among peoples and cultures. Creative processes, their unpredictable shapes and transformations, can result from encounter and from displacement of social, political, and cultural practices. The experience of resilience, and of attempts to restructure a sense of belonging, is also an aesthetic experience.

Miami, a city where oceans meet, provides a most relevant location for this exhibition. On this occasion, Miami, so often imagined as a crossroads of the Americas and a space of transition par excellence, will offer a platform for questioning colonial and modern thought, and placing it into perspective.

Where the Oceans Meet is dedicated to Eduardo J. Padrón, President of Miami Dade College since 1995. His steadfast leadership and unwavering belief in MDC and MOAD have enabled us to undertake programming such as this exhibition and laid the foundation for our renewed sense of mission. He will be deeply missed upon his departure from his position later this year.

The curators of the exhibition also dedicate it to the memory of our dear friend Okwui Enwezor (1963–2019), who regularly crossed borders and broke barriers in his life and in his groundbreaking curatorial projects. His example will remain an inspiration.

Organized by MOAD and Americas Society, New York, Where the Oceans Meet is curated by Hans Ulrich Obrist, Asad Raza, Gabriela Rangel, and Rina Carvajal. The exhibition is made possible by the support of the Miami-Dade County Department of Cultural Affairs and the Cultural Affairs Council, and the Miami-Dade County Mayor and Board of County Commissioners. We gratefully acknowledge the collaboration of the Cuban Heritage Collection of the University of Miami Libraries, Jose Antonio Navarrete, and Nadia Naami, as well as the generosity of all the lenders to the exhibition. Where the Oceans Meet is the third iteration of an exhibition project that began in 2017 as Mondialité at the Boghossian Foundation-Villa Empain in Brussels, and was reconceived as Lydia Cabrera and Édouard Glissant: Trembling Thinking at Americas Society in New York in 2018.

In April 2018, the Museum of Art and Design, Miami Dade College’s flagship museum, reopened with a renewed belief that art and design can change our communities and the world. MOAD offers groundbreaking exhibitions and programs that explore the challenges and opportunities we face locally and globally. Its programming convenes leading artists, designers, and thinkers to address the urgent questions of our time. MOAD strives to be a catalyst for action and a place that empowers people to rethink and remake their city. As the museum of Miami Dade College, MOAD follows its lead in operating throughout the city. Based in Downtown Miami’s Historic Freedom Tower, MOAD considers itself a Museum Without Boundaries. Its programing takes place in many neighborhoods, inviting everyone to be a part of the conversation. MOAD’s aim is to foster a reimagined Miami, built by and with its citizens.

Where the Oceans Meet
May 25 – September 29, 2019
Museum of Art and Design at Miami Dade College
600 Biscayne Blvd
Miami, FL