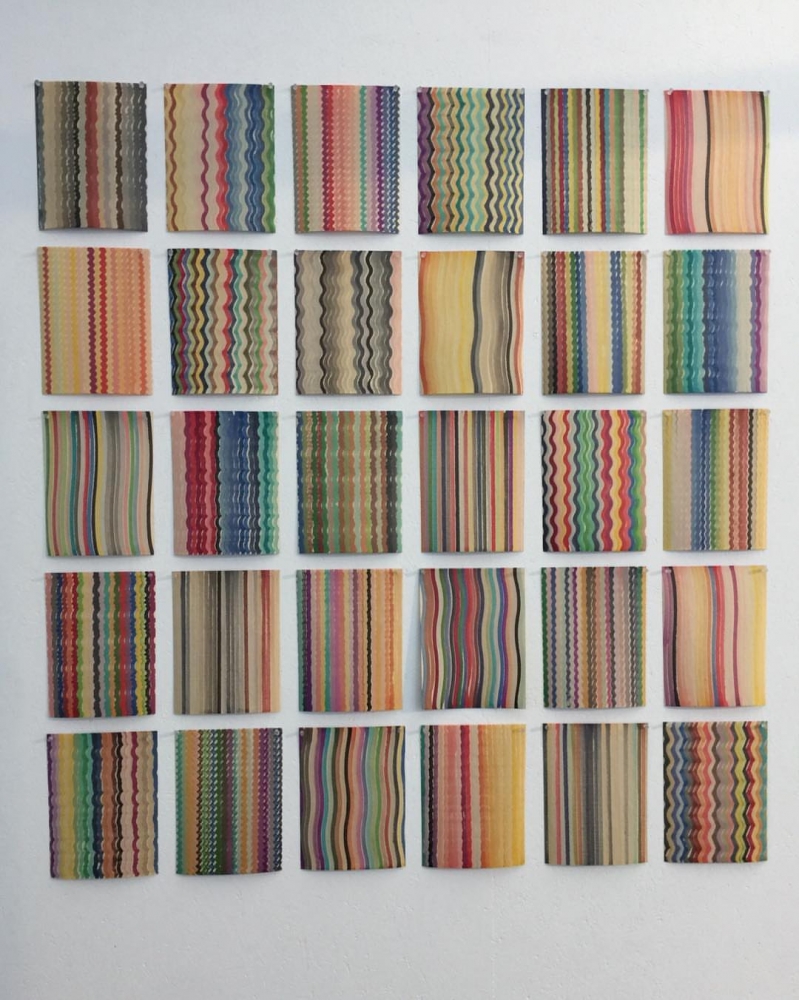 Polly Apfelbaum included in the group exhibition Patterns and Decoration, Ornaments as Promise curated by Esther Boehle, at The Ludwig Forum Aachen, Germany.

Patchworks and decorative patterns on the one hand and a political-emancipatory claim on the other – the Pattern and Decoration movement combines apparent contradictions. In the mid-1970s, the movement developed in the USA as one of the last art movements of the 20th century, in which the participation of women was as prominent as never before. The movement was supported among others by feminist artists, such as Joyce Kozloff, Valerie Jaudon, Robert Kushner and Miriam Schapiro. In reclaiming fantasy, color, variations of forms as well as sensuality, they radically distinguished themselves from the predominant Minimal Art and Concept Art at that time. The movement questions not only traditional notions of art, but also addresses broader political and social issues like the position of women, of Native Americans, or ethnic minorities in the global art scene. Pattern and Decoration represents a counter project to a male-dominated understanding of art that is globally influenced by the values of Western industrial states. The movement’s political and global aspiration is articulated through an aesthetic of captivating ease and seductive beauty: with works that celebrate sensuality, fantasy and color and through which social-critically contents, as well as an immediate lust for life, are conveyed.

The works of this movement have received little attention in Europe so far. The Ludwig Forum for International Art Aachen, home to the largest public European collection of Pattern and Decoration artworks, now undertakes a first comprehensive reappraisal and reassessment of the artistic movement through this exhibition and publication project.

The planned exhibition will present about 80 works altogether, showing the movement in all its diversity for the very first time in Europe: the spectrum of artistic forms ranges from mosaics influenced by oriental art, monumental textile collages, paintings, and graphic works through to room-sized installations and video performances. More recent works by Polly Apfelbaum, Christine Streuli, and Rashid Rana, among others, show how the achievements of Pattern and Decoration continue to resonate to this day in terms of both form and content. The movement’s interest in pictorial elements from non-Western art is more topical than ever, especially in light of the renewed discussion surrounding a “global art history” – a regular subject in major art shows like the Documenta. If one moves beyond the notorious stigma of “ornament as crime” (Adolf Loos, 1908), it becomes easy to recognize that despite all their decorative effects, ornaments have always been symbolically important and crucial for expressing worldviews. To this very day, they still serve artists as a means to reflect on their own culture and criticize, for instance, political systems, the traditional roles imposed on women, social conventions and expectations.

After Aachen, the exhibition will travel to the mumok – Museum moderner Kunst Stiftung Ludwig Wien, one of the main hubs of the art nouveau movement and thus of the ornament.

Pattern and Decoration. Ornament as Promise was initiated by the Ludwig Forum Aachen and implemented incorporation with the mumok – Museum moderner Kunst Stiftung Ludwig Wien.