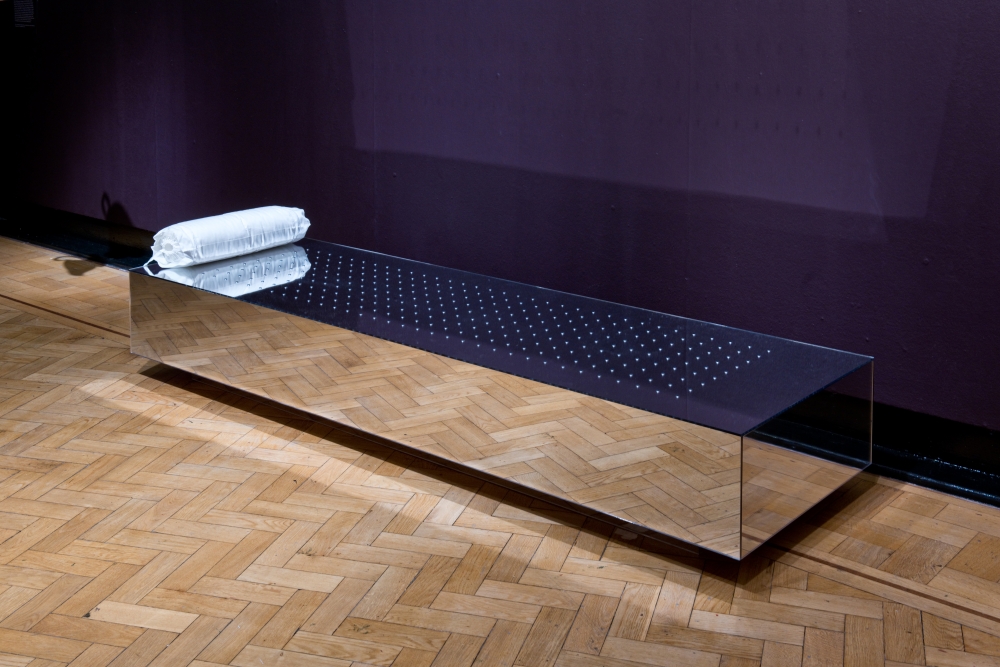 The Enchanted Interior will explore the sinister implications of a popular theme in 19th-century painting: the depiction of the interior as a ‘gilded cage’ in which women are pictured as ornamental objects.

Iconic Pre-Raphaelite and British Orientalist paintings by artists such as Edward Burne-Jones, William Holman Hunt and John Frederick Lewis will be shown alongside works by their female peers such as Emma Sandys and Evelyn De Morgan, who challenge and subvert the idealisation of women as captive damsels or passive beauties.

Installation, photography and moving image work by contemporary artists such as Mona Hatoum, Fiona Tan, Cornelia Parker and Martha Rosler reveal more complex ideas of enclosure and enchantment, alluding to the interior as a place that can be controlling, sinister and threatening as much as it can be a sanctuary.

The Enchanted Interior is built around three significant works in the Laing collection where women are trapped - psychologically or physically - in the environments we see them pictured in: Edward Burne-Jones’ Laus Veneris (1873-75) shows Venus in  the claustrophobic chambers of her court; John Frederick Lewis’ Hhareem Life, Constantinople  (1857) portrays two women in a harem, one gazing out of the window at the open spaces denied to her, and the other playing languidly with a domestic cat, a symbol for her own captivity; and a new acquisition, Nele/Nellie by Indonesian-born artist Fiona Tan (2013) shows the illegitimate daughter of Rembrandt Van Rijn pacing unhappily around a highly decorative house like the one she was confined to until her father’s death.

The exhibition examines the interior as a site in which women become ornamental objects, drawings on classical myths that feature imprisoned women and share compositional traits - the space is oppressive and lacking in depth, there is often a window (a view on to an inaccessible world) but never a door or an open path to reach it.  Highlights will include Dante Gabriel Rossetti’s Marigolds (The Bower Maiden, Fleur-de-Marie) (1874, Nottingham City Museums), William Holman Hunt’s Past and Present (1868, Aberdeen Art Gallery & Museums), The Lady of Shalott (from the poem by Tennyson) by John William Waterhouse (c.1894 Falmouth Art Gallery), Emma Sandys’s Viola (c.1865–1877, Walker Art Gallery), A Moorish Girl with a Parakeet by Henriette Browne (1875, Russell-Cotes Art Gallery & Museum) and The Gilded Cage by Evelyn de Morgan (1900 – 1919, The De Morgan Foundation).

Another theme is the dual-edged tendency to depict real women as if they are objects, and to make objects in the image of women. A key loan is Pygmalion and Galatea by Ernest Normand (1881, Atkinson Art Gallery Collection) which depicts the Greek myth of the sculptor who fell in love with a statue he had carved out of ivory. Also included is a line engraving entitled The Chosen Five by J. Cother Web 1890, after the 1885 painting by Edwin Long (1885, Russell-Cotes Art Gallery & Museum) which showcases the Victorian fascination with the myth of the artist Zeuxis, who in his pursuit of the ideal model for his depiction of Helen of Troy, selects characteristics from five different female models. Sir George Frampton’s Lamia (1899-1900, Royal Academy) is not only a mythical femme fatale (from the Keats poem about a beautiful serpent-like creature who assumes female form to win the love of a mortal) but the polychrome materials and realist depiction of the sculpture also give the illusion that it is a real woman frozen in stone.

The Enchanted Interior will foreground works in which female artists resist the tropes of the gilded cage, or appropriate them for their own ends. A work that has been key to the creation of the whole exhibition is Mona Hatoum’s installation Home (1999, Tate). Hatoum appropriates objects related to the domestic kitchen, traditionally a feminine domain, and gives them a menacing, uncanny edge - potentially lethal electrical currents course through wires connected to items such as a colander, a whisk, a ladle and a heart-shaped pastry cutter.

The Enchanted Interior has been developed by the Laing Art Gallery and will tour nationally.

The exhibition was made possible by grants from the Weston Loan Programme with Art Fund, the John Ellerman Foundation, The Henry Moore Foundation, and a Jonathan Ruffer Curatorial Research Grant from Art Fund. It will be accompanied by an illustrated publication made possible by a grant from the Paul Mellon Centre for Studies in British Art. In kind support by Bon Bloemen.